Stud breeders Brett and Amanda Shepherd, are one of the largest sellers of British Breed rams in the South East of South Australia.

Mullinger Park has a strong commercial approach to stud breeding, and thrive on the challenge to breed the perfect sheep.
Brett and Amanda have four children, Lachie, Sophie, William and Amelia.

The younger three love to be involved in the farm, and are often spotted at sales and shows, helping their parents out with the stud rams. 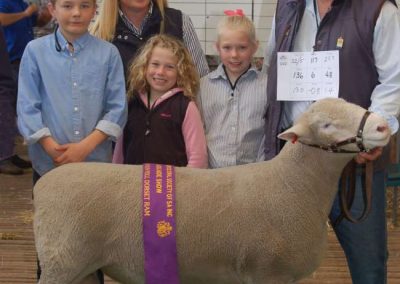 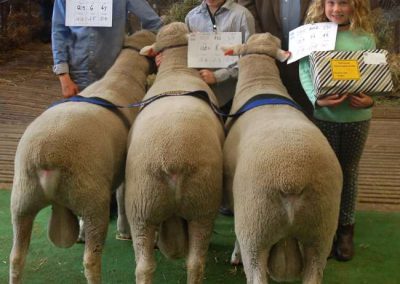 Mullinger Park has been breeding Poll Dorsets for more than 50 years but registered its stud in 1990.

Sydney Shepherd was the owner of “Mullinger Park” a property of 4634 acres. The raker used in raking the clover crop on the property was invented and patented by Sydney. He also invented the Shepherd Super Broadcaster in 1927. The machine was used extensively in the pastoral areas of South Australia, Victoria and Western Australia. Sydney also invented the Rabbit Ripper which was used for the destruction of rabbit warrens.

On two occasions, Sydney won the farm competition for the best worked farm in Naracoorte and surrounding districts. Each had to be won twice in succession. He exhibited at many sheep shows with much success and secured a first, second and grand champion prizes.